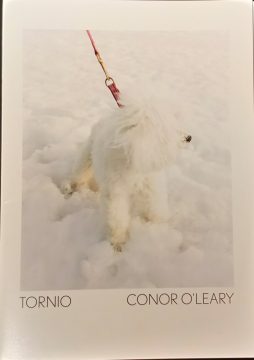 Conor O’Leary’s works from the “Torino” series explore the sense of safety and community people feel living in a small isolated town, where strangers are rarely seen and the younger population suffer the inevitable boredom of the teenager. Set in the small northern Finnish town, “Torino”, O’Leary photographs snapshot into the town’s daily lives, creating distinct portraits of the towns residence. O’Leary manages to document universal themes of love, loss, loneliness, religiosity, and belonging, all while being a stranger in a foreign land. Through his time as an artist in residence, he described his experiences with Torino as, “fleeting intimacies” that engaged himself and his photography with a sympathetic perspective with those who lived there.

O’Leary is interested in the temporal intimacies created by the encounters he engineer with strangers, an approach important to his working process. He says, “being open and honest with strangers enables me to create an intimate moment with someone I have just met”.

About the Author
Born Wexford, Conor O’Leary studied Photojournalism in the University of Wales, Trinity Saint David. O’Leary is now based in London, working as an editorial photographer while maintaining a personal practice, undertaking long-term projects where he visits and revisits communities in often remote locations. His focus is often on portraiture, using fleeting encounters to make intimate images of the strangers he encounters.
/http://www.conoroleary.com/

About the Publisher
Conor O’Leary operates his own small publishing project “YELLOBELLI”, for the creation of his work, however in the near future he plans to publish other photographers in the future.