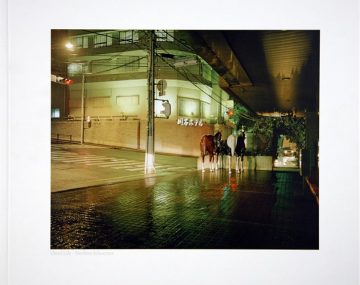 Third Life is the new monograph by photographer Norbert Schoerner. Assembled as a cinematic narrative, this book collects new and previously unseen work produced over the last seven years.

‘These photographs have no single subject or theme, and belong to no single genre. They comprise images snapped for Schoerner’s ‘sketchbook’ and highly choreographed tableaux, urban and rural landscapes, still lives and what might tentatively be called abstract works … Although they are preoccupied with the promises and pitfalls of representation, they do not seek to contrast the “natural” with the “artificial”, but rather position both as aspects of the same reality. Aside from the occasional colour correction, there is no postproduction on the majority of Schoerner’s shots, and no real need for it. After all, these are images of a world that constantly edits and re-edits itself.’
– Tom Morton from his introduction to Norbert Schoerner: Third Life

‘Small, sudden acts abound here, in this new world, amidst the exhausted bones and irradiated plastic meat of the last: an impossibly casual levitation, a shape shifting. A transubstantiation. Anything can trigger the event. … But the final glimpses linger, the dying visions, glimmering into third life, signalling through a stilled landscape of cenotaph.’ – Geoff Cox from Norbert Schoerner: Third Life

Norbert Schoerner is a photographer and filmmaker whose fashion campaigns have included Comme des Garçons and Prada; his editorial work has been seen in The Face, New York Times Magazine, Vogue and many other publications. Schoerner’s work has been widely exhibited, including shows at White Cube, Chapman Fine Arts and the 10th International Architecture Exhibition at the Venice Biennale (2006). This is his second collaboration with Violette, following a photographic essay he created for Judith Clark’s and Adam Philips’ The Concise Dictionary of Dress (2010).