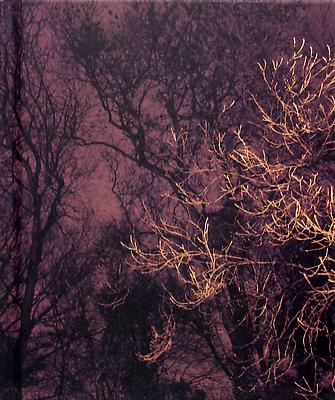 In 2001, the Shoreditch Biennale and the Hasselblad Center published a very small book of Seawright’s
called The Forest and this work doesn’t provide an easy explanation but lets the viewer’s mind wander over the possibilities. There are no words. Here we are given 17 photographs; shot at night, lit by the amber glow of what we may assume are street lamps. The places that are described are desolate roadside lay-bys, ditches, and car parks bordering the edge of a forest. By day, these spaces might be so ordinary that they are no longer seen, but by night, they take on a sinister tone.

About The Artist
Paul Seawright is Professor of Photography and Head of Belfast School of Art at the University of Ulster. His photographic work is held in many museum collections including The Irish Museum of Modern Art, Tate, San Francisco Museum of Modern Art, International Centre of Photography New York, Arts Councils of Ireland, England and N.Ireland, UK Government Collection and the Museum of Contemporary Art Rome. In 2002 he was commissioned by the Imperial War Museum London to undertake a war art commission in Afghanistan and his photographs of battle-sites and minefields have subsequently been exhibited in North America, Canada, Ireland, Spain, France, Germany, Korea, Japan and China. In 2003 he represented Wales at the Venice Biennale of Art and in 1997 won the Irish Museum of Modern Art/Glen Dimplex Prize. He is represented by the Kerlin Gallery Dublin.
paulseawright.com/

About The Author
Val Williams is a British curator and author who has become an authority on British photography. She is the Professor of the History and Culture of Photography at the London College of Communication, part of the University of the Arts London, and was formerly the Curator of Exhibitions and Collections at the Hasselblad Center.

About The Publisher
Hasselblad Center is a special foundation that Hasselblad Foundation formed in 1989. Its purpose is to promote scientific research and education in photography.