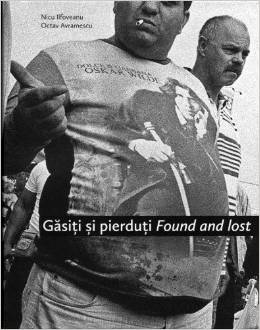 ‘Oh, %*$%! There is something I forgot to put in the book. About Baudelaire and the rag pickers (chiffoniers). Nadar, the photographer, met the poet before the thrash can, that invention of Poubelle, lord mayor of Paris, changed the streets of the cities. He says Baudelaire had the “jerky gait” of those who intermittently stopped to rummage through the refuse of society. Walter Benjamin notes that there is much to indicate Baudelaire secretly wished to bring out this relationship with them. Both sides of an heroic model. Only later does the flea market appear, rolled outside of the city by the poubelle and thrown on the ground like a siege refused by modernity.

This book shows that siege’s escape plan, blown up to a 1:1 scale. Nicu Ilfoveanu, the photographer that has studied the people at the flea market from January to December, is joined here by the intuition and critique of the surrealists, which approached words as found objects, changing a historical vision of the past for a political one, by the involuntary “untold epolet” signature of Sasha Pana, avantguardist reporter and doctor in the army, Gheorghe D’Unu, also reporting from the Moshi fair, us, a mysterious photo from the last supply on film that can be found, other strangers and intimate objects.’
Nicu Ilfoveanu