‘State of Mind’ is a photographic series, and ultimately a book, about the individual quality of mysterious strangers. 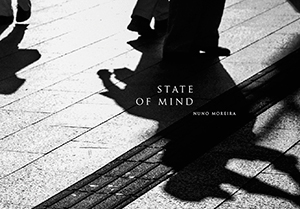 The images were captured over a period of several years traveling in countries such as Japan, Portugal, Hungary,
Malaysia, Spain, South-Korea, Romania, Russia, Taiwan – and what emerged is a visual narrative on the poetic
quality of individuality and what it means to be lost in thoughts.
The State of Mind series is about the “thinking moments” and the uncertain atmosphere surrounding the people and places
encountered on the way.

Nuno Moreira is an independent visual artist working in the realm of graphic design, photography and collage.
Born in 1982 (Lisbon), Nuno studied audiovisuals and multimedia communication but always worked as photographer, educator and designer, being most importantly a self-taught image-maker.
Currently living in Tokyo and working independently since 2007 through his own studio NM Design, which specialises in art direction for book covers, photography, music design and branding, his side projects include collage pieces under the banner of Abrakadabra and numerous series of photography projects/installations, such as the recent published book State of Mind. As a multidisciplinary artist Nuno has exhibited solo and in group shows since 2006 in galleries around the world and his led by curiosity to experience different cultures and engage in stimulating new projects.
www.nmdesign.org