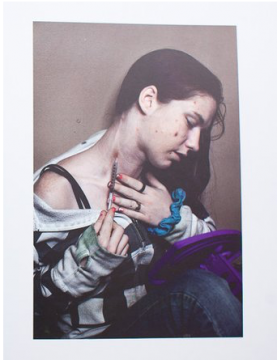 Live Through This by Tony Fouhse tells the story of drug addict Stephanie MacDonald’s struggle to get clean. Typically a topic for documentary photographers pursuing reportage through candid shots, this project instead relies mostly on collaborative portraits, in which Tony Fouhse enlists MacDonald to sometimes mimic the conventions of documentary and anthropological photography. The images of MacDonald, like the world she inhabits, are both banal and extraordinary, conveying psychological, and sometimes physiological, states with an affecting economy of detail. The inclusion of medical documents and text by MacDonald, both written on scraps of paper and from later emails, provides the viewer with a broken and incomplete narrative that nonetheless directs our comprehension of Fouhse’s disturbing but sympathetic photographs. Published by Straylight, 2013.

More than 40 years it’s been now, and Tony Fouhse still hasn’t tired of shooting. Fouhse is an editorial and commercial photographer. He also spends a lot of time and emotion photographing personal projects. He has been nominated 3 times for the National Magazine Awards (and won once). His personal projects have attracted international attention and been published around the world. As well, images from his personal work have been aquired by institutional collections including The National Photo Collection of Belgium (on permanent display), the Art Collection of Global Affairs, Canada and the Ottawa Art Gallery Collection. In 2010 he was awarded The Karsh Award for Photography. Every day Fouhse finds himself in a different situation. Different circumstances. No matter, he always throws himself into the experience. Photos come out of this process. Convincing. Vigorous. Keen. Uncanny.