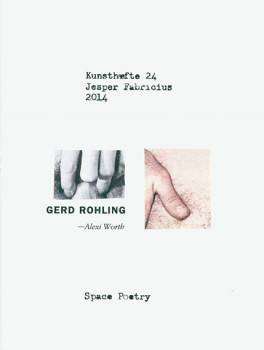 Names combined with clippings of hands or fingers placed on various body parts.

About the Artist:
Having debuted as an artist in 1979 and having never stopped since then, Jesper Fabricius can be called a milestone in the artistic scene in Copenhagen. But, if you tell him openly, he nods his head yes and no and pours you more tea. “I’m just older than others”, he replies after a while with a charming rascal’s smile. By the time I met Jesper in his studio, I had already witnessed to what extent Danish people strive for mediocrity and modesty about their achievements. So, I smiled back and decided not to believe these words too much. As an artist, Jesper works with a wide range of media: installation, ready-made, painting, photography, graphics, collage and drawing. But even if the means of expression are many, there is an overriding intention in his whole practice, that is, the relationship between imagination and reality and how meanings change depending on the context where they are located.
jesperfabricius.dk

About the Publisher:
As an editor, Jesper runs Space Poetry, a publishing house dedicated to artists’ books he founded in 1980 with a bunch of people, some of which he still collaborates with. “These young artists, in their youthful arrogance, think their art is so unique that the following year they launch the art magazine Pist Protta, which recently released its issue no. 116” (1).
spacepoetry.dk