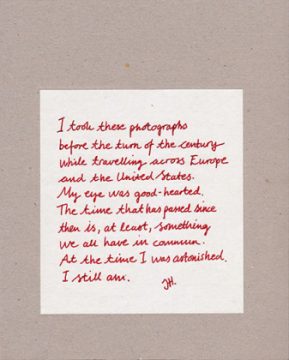 In the late 1990s, Swedish photographer JH Engström travelled across Europe and the United States with his camera in hand. The series of colour and black-and-white images in this book shows but fragments of what was apparently an impressionable time for him: snippets of everyday life, urban scenes and portraits, and brief glimpses into the lives of the various people he encountered along the way. Highway rest stops, diners, construction cranes, pool halls, railways, domestic scenes and abandoned buildings are just some of the many settings in which the human aspect is always sought out and honestly perceived through Engström’s inquisitive lens.

JH Engström is a photographer and artist based in Stockholm.
www.jhengstrom.com

André Frere Editions is a French publishing house, founded in 2013.