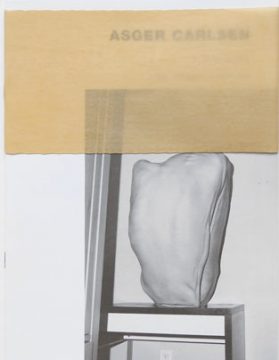 Asger Carlsen likes to think he is a sculptor and uses photography as an elastic, malleable and generous raw material which forgives him anything. The image is nothing more than a surface, not unlike a skin he manipulates. There is no evidence that he passed through. Yet, the result oozes with his signature. This book was published to accompany the first exhibition of Asger Carlsen at Galerie Olivier Robert in Paris.

Asger Carlsen is a Danish photographer, based in New York City.
www.asgercarlsen.com

CLASSIC is a Parisian publisher and distributor of photobooks.

Co-director of Galerie Alain Le Gaillard from 2001 to 2007, Olivier Robert decided to open his own space in the heart of the Marais in Paris in 2008. He did so in order to develop his view on art by promoting a core of national and international artists that he has regularly and drastically increased over the years. The gallery is now a singular entity, consistent and united, that provides a constant field of freedom to the development of ideas and focused on the realization of their forms.