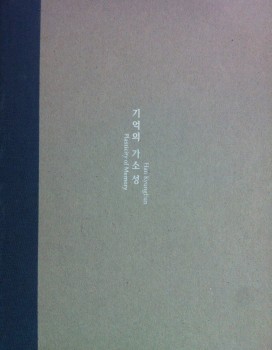 ‘I believe that the answer of possibility and meaning of human beings can be identified by human body. In my practice, I take notice of the meaning of body which makes intimacy and interpersonal relationship possible or induces inner experience toward spiritual mature. I have been dealing with human body as a place where conscious and unconscious is embodied, and also take photography, which is spiritual and passive, as the main media for my works.

Last winter again, I had to open the mail box to remember his deathday. It was to see the date of the last email from him. It has been 12 years.. or 13 years. I never remember his deathday but my whole body remembers biting wind of crematorium. Winds create incidents that didn’t even exist with all kinds of loss and yearning and bring non volitional memories.

Involuntary forgetfulness and memory crosses the boundary of a blessing and a curse. Incidents that were not captured even with voluntary memory sometimes approaches at moments of the involuntary memory. This is because there is a sameness between the current sense and a sense of the past. When we think about the memory, it gets separated from material world and it doesn’t only exist as a notion. As memory obtains the place that enables to experience through body, it has an inseparable relationship with body.

Memory has characteristics of creation, evaporation, distortion and deformation at its will. Just like plasticity that leaves a modified object a permanent set without going back to the original form even after removing an external power, memory also has characteristics of instability, imbalance, disharmony and fragmentation. With these characteristics of the memory, through a special makeup, which is manipulative and artificial process, intimate memories or trauma has been imaged.

In order to have participants, 20’s men and women through an online site have been collected. It was wondered that if today’s 20’s people who are struggling with school admission and employment have the same memories and wounds. Before shooting, between two subjects, ‘to you I hate to death’ and ‘to me of the day’ we let them choose one of them and write a letter. There is no receiver. By writing letters to their parents, friends, lovers and to them selves, they would encounter a special time. After writing a letter, the participants in front of the camera were still remaining at some times. This could be also just my own illusion.. A disastrous scene of the memory.