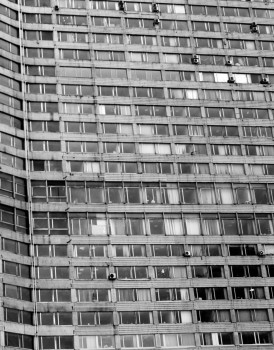 Russia has undergone a radical change over the last two decades. It has changed from being a socialist state-run system, with central planning based on cooperatives, to a market economy. The result of this transition has been the emergence of two social strata: the nouveau riche, which surfaced after the fall of communism, mostly from the ruling classes of the old Communist Party, and the rest of the population, which has increasingly grown apart from this dominant social group owing to economic differences. This has led to the great distance that exists between the two—one that is more and more difficult to overcome.

The clearest image of this change is seen in Moscow, which has gone from being a grey city without services to becoming one of the most expensive in the world. Resulting from the uncontrolled consumerism of Russia’s new rich, Moscow now features a mixture of huge Soviet-style buildings and shop windows filled with all manner of products.

Despite the new generations never having lived under the former regime, the legacy of the Soviet Union continues to weigh upon them. Much of the population was born in a country that no longer exists, but the old traditions and ideologies remain imbedded in its inhabitants. The population is treading a path that is a mix of past and present in order to find its place in the new Russia.

Rosa Rodriguez studied Art Education at the Complutense University and Art Photography at the School of Arts and Design, both in Madrid.
www.rosarodriguezsanchez.com