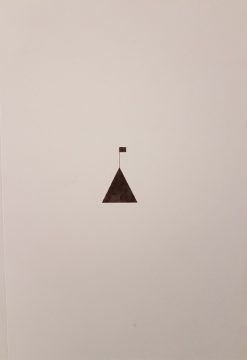 No nation exists in a physical way, that is, as an objective entity. Its intangible nature is held as a mental construction present only in the collective imagination. However all war, all state violence and all forms of government are based on the concept of nation. Through performative actions in which several icebergs are boarded, to equip them with nationality and fag, the viewer is invited to question the validity of terms such as country, nation and nationalism, evidencing the abstract and temporal nature of concepts that, although lacking solidity objective, are sources of continuous tension.

About the Artist
Rubén Martín de Lucas (1977, Madrid) is an artist with a peculiar background. In 2002, he graduated as civil engineer, and from 2001 to 2015, he worked in the field of urban art with his collective Boa Mistura, developing projects all over the world.

In 2015, he began his solo career with focus in “landscape and associated behaviour”. His projects evolved from painting to more conceptual processes, expanding his language to photography, video and actions in the landscape.