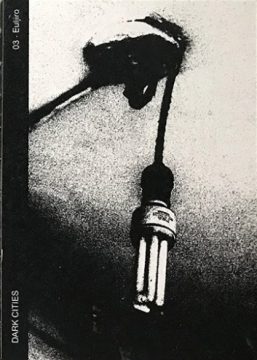 Dark Cities is a self-published project in a thin-cardboard folder containing 3 books that are 3 perceptions of Singapore, Tokyo and Seoul through the « lens » of a specific and unusual location: a carpark (01 – Carpark), a run-down tower (02 – Capsule), an old city quarter (03 – Euljiro). The original training as an architect of the artist Shyue Woon is very present in this triptych that also carries a rather dark atmosphere
Shyue Woon stumbled into this mysterious old quarter in Seoul during her travels. The further one wanders in, the smaller the alleys get and the older the shops appear.  While the locals put on suits and ties and go to work at the adjacent gleaming new glass and steel office towers, middle-aged men in Euljiro operate band saws or large presses, amid the smell of grease and metal all around. Perched on a tiny stool on the sidewalk, a roving knife-sharpener scrapes a blade across a whetstone, while nearby another man works in a shop where the entire floor is covered in rusty metal hooks. Porters ferry things around on two-wheeled dollies, and motorcycle drivers drop off and pick up deliveries.  It’s nearly all men who do these things in the alleys.

About the Artist
Shyue Woon (b.1975), trained as an Architect, uses photography as a tool to explore subtext in the built environment. In his daily practice as an architect, he turns aspirations and dreams into constructible reality. At night, he reverses the process – deconstructing reality and spaces into fiction and figments of imagination.

About the Publisher
Invisible Photographer Asia (IPA) | 亞洲隱形攝影師 was founded in 2010, and since then has grown into a leading and influential platform for Photography and Arts in Asia. We participate vigorously in the movement of Photography in Asia through talent showcases, events and exhibitions, publishing, workshops and education, and community outreach. Since inauguration, IPA has partnered with organizations such as The Angkor Photo Festival, Photo Bangkok Festival, Photo Kathmandu, Objectifs Centre for Photography and Film, National Museum Of Singapore, Singapore Heritage Society, SONY Electronics Asia, and Leica Camera Asia Pacific, to name a few.