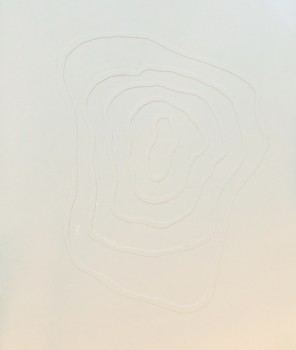 ‘I am interested in contour line, which is a method used for indicating equal elevation above a given level such as when depicting the form and height of a mountain on a map.

A series of systematic lines are lined up to form contour lines, which are indicated in different colors according to the elevation of each mountain.
I believe that these contour lines share similar attributes of emotional lines human beings have. Just as each mountain has its own contour lines, each person has his/her own emotional lines, which can be extremely fluid. In addition, while mountains are scaled over long period of time to take the present forms, it is interesting that people develop their deep creases depending on the frequently used facial expressions. These creases are the most attractive lines that human beings possess.
I feel that it is part of our instinct to observe the emotions of others. However, these emotions cannot be defined or described in one way. They are too extensive to be treated thus.
That is why I try to become a more specific observer. I intend to observe people who are in the same environment and have identical goals and explore the emotions, in other words, the looks and gestures, that each human being individually shows.’