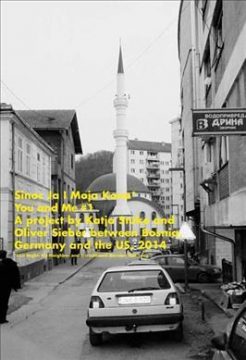 You and Me follows the story of a Bosnian-born refugee who lived in Dusseldorf in the 1990s before moving to the US. The photobook sets up links between Bosnia , Germany, and the US, while also providing a contextual frame for the artists and their relationship to the past. “We didn’t just want to tell a historical story; instead we set out to shift the perspective between the present and the future and generate connections between the three countries using visual material relating to the military, politics, music, and film.” The book includes more than two hundred images organized in twenty-two chapters reflecting the different aspects of the series, as well as five other chapters including research material, background information, some short stories, and a text by Aleksandar Hemon.
You and Me won the LUMA Foundation’s Dummy Book Award at the 2016 Les Rencontres de la Photographie Festival in Arles. The project came into being with support from the MoCP Chicago, the Goethe-Institut in Chicago, the Goethe-Institut Sarajevo, Les Rencontres de la Photographie and the LUMA Foundation in Arles

About the artists
Katja Stuke, born 1968, is a German photographer. She studied from 1988 to 1993 she studied visual communication in Dusseldorf, specializing in typography , photography / film. From 1993 to 1998 she worked for Michael Schirner . Together with Oliver Sieber , with whom she forms an artist couple and runs a joint studio in Düsseldorf, she publishes the photography project Frau Böhm , which developed into Böhm / Kobayashi.
Katje Stuke

About the publisher
Spector’s publishing practice is settled squarely in the intersection of art, theory, and design. Based in Leipzig Germany, our publishing house explores the possibilities offered by an active exchange between all parties involved in the book production process: artists, authors, book designers, lithographers, printers and bookbinders. The book as medium is turned into a stage, a site of encounter for productive exchange. Finding innovative approaches to the medium today calls for a well-considered interplay between content, design, and materiality of a book.
Spector Books