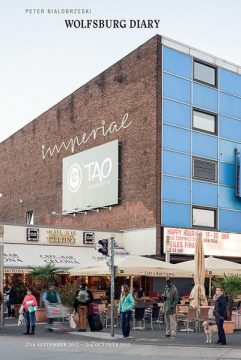 In 2015, Peter Bialobrzeski returned to his hometown, Wolfsburg, to document the changes the city has undergone since his leaving many years previous.
“In the 80’s, I always felt that Wolfsburg was a socialist dream. It felt like everybody was participating. Now the picture has changed”.

Wolfsburg Diary is the 3rd book in the City Diaries series.

Peter Bialobrzeski is a world ­renowned photographer and the recipient of several awards including the prestigious “World Press Photo Award” in 2003 and 2010. He is also the author of over ten photobooks, including “Neon Tigers”, “Heimat”, “Lost in Transition” and “Paradise Now”.
www.bialobrzeski.de