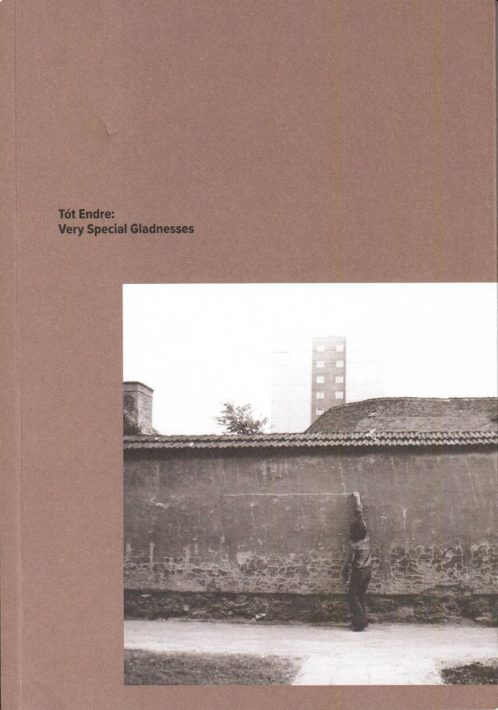 “Endre Tót’s series Very Special Gladnesses is a work realized in 2015 based on an artistic concept developed between 1971 and 1976. One of the earliest pieces from the artist’s conceptual period starting in 1970, a “Joy-piece”, a work definitive of his later practice, consists of 37 photographs with associated texts and 5 photo series comprised of five photographs each.

In 1971, the artist documented photo actions with the contribution of a professional photographer, with the intention of creating a conceptual series that would associate texts with images. A number of actions were documented between 1971 and 1976, resulting in small black and white photo prints, some of which would appear now and then as conceptual photographs or collage elements in Tót’s conceptual works. Some selections from the series were published in a format corresponding to the original idea – simultaneous presentation of image and associated text – in 1976, the year the series was concluded, in three different publications: Flash Art, the Belgian art magazine +-0 (Plus Minus Zero) and the Hungarian art photography journal Fotóművészet, accompanied by László Beke’s essay. To Endre Tót, being published in a Hungarian and two international publications meant that his concept had assumed material form and his work had reached the audience.

It was the resurfacing of the original negatives in 2015 that gave a good reason for Endre Tót to consummate his early idea and complete the series in its originally conceived form. After 40 years, the entire series is now presented for the first time at this exhibition, as an addendum to Endre Tót’s diversified art practice in the period.”

About the Artist
Endre Tot is an experimental artist and photographer that has had major influences in contemporary art within Europe ranging over 6 decades. His work is known for collage work, combining text and image, and using and repurposing negatives.