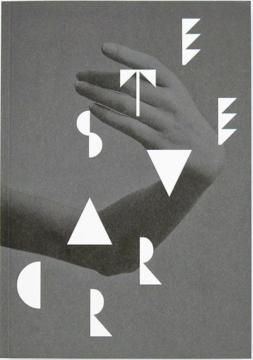 Leveraging the long history of hands in art and film – from the fetishistic symbolism of Surrealists Man Ray, Salvador Dalí and Luis Buñuel, to the nonchalant minimalism of choreographer and experimental filmmaker Yvonne Rainer – prominent New Zealand artist Steve Carr‘s Variations for Troubled Hands lifts its title from an imagined technical manual for ballerinas. Featuring more than 200 photographs of Cadence – a teenage ballet prodigy apprenticed to the Royal New Zealand Ballet – Carr’s debut book presents a serial composition in 12 parts, choreographed and performed by fingers, forearms, tendons, palms, wrists and thumbs. At once an interactive object and
a performance space, Variations for Troubled Hands manifests the dynamics of movement, and invites us to dance with it.

About the Artist
Time is perhaps the central actor in Steve Carr‘s wider practice. Operating at the crux of photography, moving image and a kind of deferred mode of performance, the New Zealand artist skirts the poetic, gestural, ad-hoc alchemic and quietly absurd in his film and photographic series, slowing time to a crawl as he interweaves actions, experiments and unlikely cultural references to create images that are at once deft and strangely virtuosic.