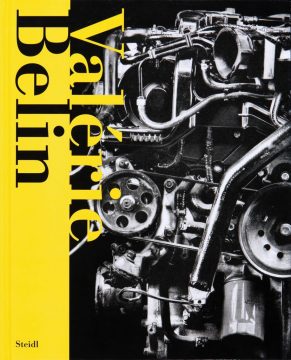 Valerie Belin’s images avoid simple representation or description, although she often photographs simple objects–glasses, silverware, or cars–or slightly less simple ones such as Venetian mirrors or animal carcasses. Each picture attempts both to unveil the very essence of its subject and to delve into the deepest secrets of matter and light, almost independent of the subject. This comprehensive retrospective includes explicit studies of bodybuilders, demure ones of Moroccan brides and bold work on what Belin calls “hybrid entities,” such as transsexuals, Michael Jackson look-alikes and the mannequins in shop windows.

Valérie Belin was born in 1964 in Boulogne-Billancourt, France. She lives and works in Paris, France.
www.valeriebelin.com

Celebrating some of the most distinctive voices in contemporary literature, Steidl publishes German literature as well as translations from French, English and Icelandic. In 1996, Steidl started his own photo book program. Today, some of the most renowned photographers and artists across the globe are part of the Steidl program, including Joel Sternfeld, Bruce Davidson, Karl Lagerfeld, Lewis Baltz, Ed Ruscha, Roni Horn, Paolo Roversi and Juergen Teller, to name but a few.