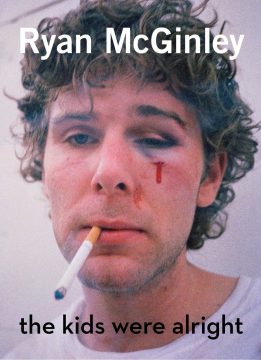 The first book to examine Ryan McGinley’s early photographs and Polaroids—raw, visceral portraits of his coterie of friends and artists
in downtown New York City.

Published to accompany an exhibition at Museum of Contemporary Art Denver, Ryan McGinley: The Kids Were Alright focuses on the photographer’s early work from 1998 to 2003, the year of his solo exhibition at the Whitney Museum of American Art.

These early photographs and Polaroids—many of which have never been exhibited or published— document his friends and collaborators in downtown New York City. In the process, McGinley created a powerful portrait of his generation and their often debauched lifestyle: gritty, daring, and focused on moments of both pleasure and tedium. McGinley’s singular ability to capture the mood and emotional depth of a moment is evident even from the earliest years of his career.

Curator Nora Burnett Abrams offers the most comprehensive consideration to date of this important work in her essay, and other contributions— including an interview with McGinley and artist Dan Colen and several short reminiscences from many of his subjects and social circle at the time— will provide context and commentary on the more than 100 works in the volume.

Ryan McGinley (October 17, 1977) is an American photographer living in New York City. McGinley began making photographs in 1998. In 2003, at the age of 25, he was one of the youngest artists to have a solo show at the Whitney Museum of American Art. He was also named Photographer of the Year in 2003 by American Photo Magazine. In 2007, McGinley was awarded the Young Photographer Infinity Award by the International Center of Photography. In 2009, he was honored at The Young Collectors Council’s Artists Ball at the Guggenheim Museum. A 2014 GQ article declared McGinley, “the most important photographer in America.”
ryanmcginley.com

Nora Burnett Abrams is Curator at MCA Denver. Her curatorial career began at The Metropolitan Museum of Art, where she worked on the Sol LeWitt on the Roof and Robert Rauschenberg: Combines exhibitions. Since arriving in Denver in 2010, she has organized over 30 exhibitions and authored or contributed to nearly a dozen accompanying publications. She has taught art history at New York University and lectured throughout the country on modern and contemporary art. She holds art history degrees from Stanford University (B.A.), Columbia University (M.A.), and a Ph.D. from the Institute of Fine Arts at New York University.

Rizzoli New York joined such prestigious American institutions as Tiffany’s, Saks, and Cartier when it first opened the Rizzoli Bookstore on Fifth Avenue in 1964. In the following years, its landmark building in New York became the center for the company’s national expansion, adding new bookstores throughout the country and, a decade later, establishing an eminent publishing house renowned today for high-quality, illustrated books.
rizzoliusa.com