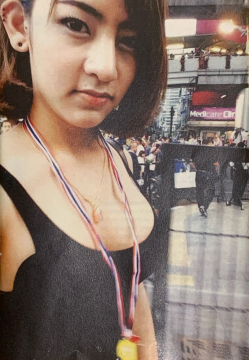 Thai Politics no.4 vol.1 (Bangkok Beauties) presents a series of 86 images featuring female supporters of the People’s Democratic Reform Committee – taken from public Facebook and Instagram groups. The project serves to highlight the somewhat intriguing and curious ways protesters have begun assert their anti-government stance. The ‘selfie’ and portrait has become a prevalent part of youth culture and its manifestation within traditional displays of patriotism and politics, adds another dimension to the discussion concerning status, self-projection, and identity in the rise of social media.
‘Thai Politics’ is an ongoing series developed from the first major protest in Bangkok since 2006. Whilst exploring the differing political attitudes in Bangkok, the project also examines photography within an image rich world. Punctuating each addition to the series is not only a different dimension to people’s political views and behaviours, but also a different approach to how they are captured and presented. This includes curating images found across social media (Thai Politics no.2, 4, 7, 8 and 9) to the more traditional approach of digital and film photography (Thai politics no.1, 3, 5 and 6).

About the Artist
Miti Ruangkritya (1981, Bangkok, Thailand). Miti was a Selected Winner by the Magenta Foundation for Emerging Photographers (UK) in 2011. He was featured as an emerging artist at Bangkok University Gallery in 2014. Additionally he was shortlisted for Kassel Book Award in 2015 and nominated for Prix Pictet in 2015-16. In 2016 he was selected as one of the finalists of the Sovereign Asian Art Prize. He is nominated for 2020 Sovereign Art Prize.
Exhibitions in 2017 include Shaping Voices, Silent Skies (Tomio Koyama/8, Tokyo) as part of a 3 months residency in Tokyo supported by Arts Initiative Tokyo and Backers Foundation, After Utopia: Revisiting the Ideal in Asian Contemporary Art (Samstag Museum, Australia).
Exhibitions in 2018 include Sathorn Sunset (WTF, Bangkok) as part of exposed up-and-coming artists project by the Art Centre of Silpakorn University, Tokyo A La Carte – The Backers Foundation and AIT Residence Programme (Tomio Koyama, Tokyo), Unidentified Landscape: Hotel Asia Project (Organhaus, Chongqing, China) and In Other Image When Words Fail (Singapore Photography Festival). He produced 2 books including Sathorn Sunset and 1 Square Metre of Soil with Onestar Press.