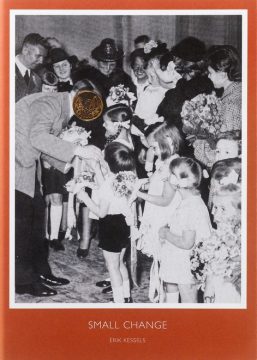 Online auction sites often show photographs where details or sections of the photograph have been covered due to privacy and/or censorship issues. This means that sellers are forced to come up with smart and practical solutions so that the photograph conforms to privacy and censorship guidelines, but still shows enough of the image to interest prospective buyers. This often results in accidental but hilariously interesting new images. Erik Kessels purchased the book ‘Ein Volk ehrt seinen Führer’ at an online auction. It caught his attention because the seller had censored the photos using carefully placed coins. The coins added a new dimension to these controversial images, which inspired Kessels to create a facsimile; a reproduction of the original but completely censored, from front to back. This is a political cover up that might actually make you smile. Small Change is a documentation of, and a tribute to a little-known Internet phenomenon.

About the Artist
Erik Kessels was born in 1966; he lives and works in Amsterdam. He has presented numerous exhibitions at Fotografia Europea in Reggio Emilia (2015), Centquatre-Paris (2014), Les Rencontres d’Arles (2014), the Victoria and Albert Museum in London (2013), Pier 24 Photography in San Francisco (2014–15) and the Images – Festival des Arts Visuels in Vevey (2014).
He might not shoot pictures himself, but the Dutch art director and collector Erik Kessels has certainly changed the way we think about photography. As a curator of amateur photography, he’s elevated discarded images to gallery status, finding beauty and insight in pictures of, say, 20th century German police uniforms, or one woman’s lifelong love of fairground shooting galleries.

About the Publisher
KesselsKramer is a company which aspires to do things differently in the field of communications. KesselsKramer Publishing is an extension of this restless attitude. In images and words, it finds new ways of expressing creativity through printed matter.
www.kesselskramerpublishing.com