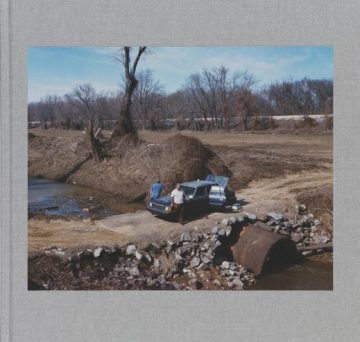 Evolving from a series of road trips along the Mississippi River, Alec Soth’s “Sleeping by the Mississippi” captures America’s iconic yet oft-neglected “third coast.” Soth’s richly descriptive, large-format color photographs present an eclectic mix of individuals, landscapes, and interiors. Sensuous in detail and raw in subject, “Sleeping by the Mississippi” elicits a consistent mood of loneliness, longing, and reverie. “In the book’s 46 ruthlessly edited pictures,” writes Anne Wilkes Tucker, “Soth alludes to illness, procreation, race, crime, learning, art, music, death, religion, redemption, politics, and cheap sex.” Like Robert Frank’s classic “The Americans”, “Sleeping by the Mississippi” merges a documentary style with a poetic sensibility. The Mississippi is less the subject of the book than its organizing structure. Not bound by a rigid concept or ideology, the series is created out of a quintessentially American spirit of wanderlust.

About the Artist:
Alec Soth (born 1969, Minneapolis, Minnesota, United States) is an American photographer, based in Minneapolis, who makes “large-scale American projects” featuring the midwestern United States. New York Times art critic Hilarie M. Sheets wrote that he has made a “photographic career out of finding chemistry with strangers” and photographs “loners and dreamers”. His work tends to focus on the “off-beat, hauntingly banal images of modern America” according to The Guardian art critic Hannah Booth. His work has been compared to that of Walker Evans and Stephen Shore. He is a member of Magnum Photos.
alecsloth.com

About the Author(s):
Patricia Hampl (born March 12, 1946) is an American memoirist, writer, lecturer, and educator. She teaches in the MFA program at the University of Minnesota at Minneapolis and is one of the founding members of the Loft Literary Center.
patriciahampl.com

Anne Wilkes Tucker was an American museum curator of photographic works. She retired in June 2015.

About the Publisher:
In 1994, Gerhard Steidl launched its international photobook program. Today it includes some of the world’s most renowned photographers and artists including Joel Sternfeld, Bruce Davidson, Robert Frank, Robert Adams, Karl Lagerfeld, Lewis Baltz, Dayanita Singh, Ed Ruscha, Roni Horn and Juergen Teller, to name but a few.