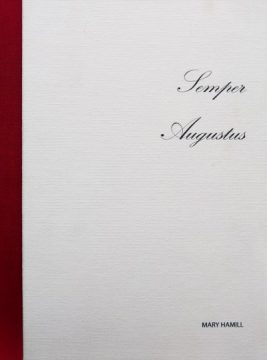 The tulip was introduced into Europe at the end of the 16th century, having been exported from the Ottoman Empire. The Dutch took to the flower and started to grow tulips commercially. So great was the demand for tulips, and the prestige associated with them, the Dutch people were overtaken by what is now known as ‘Tulip Mania.’ Many merchants made a lot of money as the prices of the bulbs escalated at an unprecedented pace, increasing hugely until, eventually, the economic bubble burst in 1637.
Most famous and desirable of all were the bulbs of the Semper Augustus tulip flower, prestigious and beautiful, with distinctive red and white streaky petals. In his famous book on the tulip mania, published in 1841 (‘Popular Delusions of the Madness of Crowds’) the author Charles Mackay explains how one Semper Augustus bulb was exchanged for 12 acres of land. There was also a futures market which collapsed, the first known reference to pre-selling.
The Semper Augustus has retained its position as the most celebrated of all tulips; these are grown and displayed, against fierce competition, in spring flower shows across the globe.
Mary Hamill has created her own version of this famous flower, but with a dreadful and wonderful twist. For these flower like objects turn out to be her own menstrual cycles. She informs us of the date of the month they were created and with the thirteen images takes us through a full calendar year.

About the Publisher
Editions Bessard is a paris-based independent publishing house created by pierre bessard in 2011. Focusing on working with artists, writers and curators to realise intellectually challenging projects in book form.