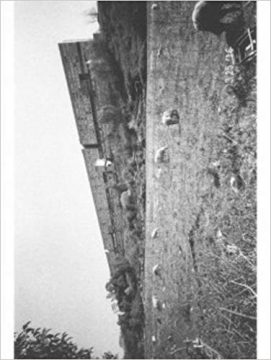 Photographs taken by Ari Marcopoulos in Rome (February – March 2016), and Malibu (August 2016). With a text contribution by Kara Walker. “Rome. (…) Here, no image or structure is complete without symbolic framing devices, which also require framing devices, and so on. Ad infinitum. Malibu. Rockstars and fallen rocks and the edge, here is where the European conquest of the New World meets its fountain of youth endgame. We have reached the end, and it is vast.”

About the Author
Born 1957 is an Amsterdam-born American photographer and filmmaker. He lives and works in New York and California. … Artists, snowboarders, musicians and skateboarders have been both muses and commercial subject-matter throughout his quarter century career as a photographer.
Ari Marcopoulos

About the Publisher
Roma Publications is an Amsterdam based art publisher, founded in 1998 by graphic designer Roger Willems, and artists Mark Manders and Marc Nagtzaam. It is used as a platform to produce and distribute autonomous publications made in close collaboration with a growing number of artists, institutions, writers and designers. Related to the content, every issue has its own rule of appearance and distribution, varying from house to house papers to exclusive books. The publications so far are in editions between 2 and 150,000 copies. Occasionally, Roma also curates exhibitions
Roma