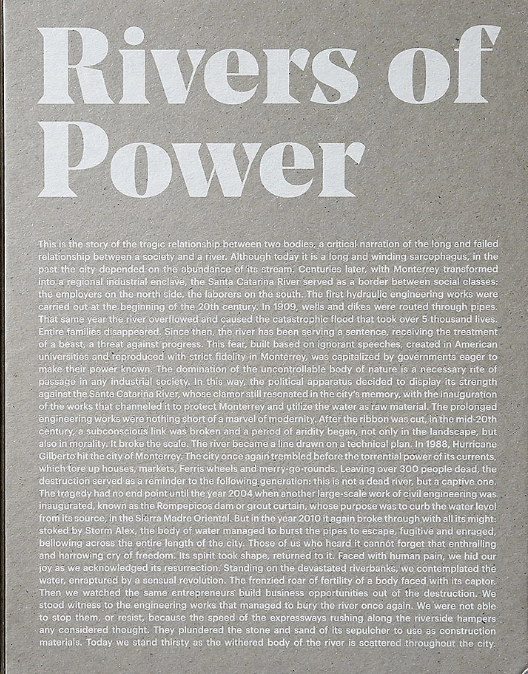 This is the story of the tragic relationship between two bodies: a critical narration of the long and failed relationship between a society and a river. Although today it is a long and winding sarcophagus, in the past the city depended on the abundance of its stream. Centuries later, with Monterrey transformed into a regional industrial enclave, the Santa Catarina River served as border between social classes: the employers on the north side, the laborers on the south. The first hydraulic engineering works were carried out at the beginning of the 20th century. In 1909, wells and dikes were routed through pipes. That same year the river overflowed and caused the catastrophic flood that took over 5 thousand lives. Entire families disappeared. Since then, the river has been serving a sentence, receiving the treatment of a beast, with its future in peril. This fear, built based on ignorant speeches, created in American universities and reproduced with strict fidelity in Monterrey, was capitalized by governments eager to make their power known. The domination of the uncontrollable body of nature is a necessary rite of passage in any industrial society. In this way, the political apparatus decided to display its strength against the Santa Catarina River, whose clamor still resonated in the city’s memory, with the inauguration of the works that channeled it to protect Monterrey and utilize the water as raw material. The prolonged engineering works were nothing short of a marvel of modernity. After the ribbon was cut, in the mid-20th century, a subconscious link was broken and a period of aridity began, not only in the landscape, but also in morality. It broke the scale. The river was a line drawn on a technical plan. In 1988, Hurricane Gilberto hit the city of Monterrey. The city once again trembled before the torrential power of its currents, which tore up houses, markets, Ferris wheels and merry-go-rounds. Leaving over 300 people dead, the destruction served as a reminder to the following generation: this is not a dead river, but a captive one. The tragedy had no end point until the year 2004 when another large-scale work of civil engineering was inaugurated, known as the Rompepicos dam or grout curtain, whose purpose was to curb the water level from its source, in the Sierra Madre Oriental. But in the year 2010 it again broke through with all its might: stoked by Hurricane Alex, the body of water managed to burst the pipes to escape, fugitive and enraged, bellowing across the entire length of the city. Those of us who heard it cannot forget that enthralling and harrowing cry of freedom. Its spirit took shape, returned to it. Faced with human pain, we hid our joy as we acknowledged its resurrection. Standing on the devastated riverbanks, we contemplated the water, enraptured by a sensual revolution. The frenzied cry of fertility of a body faced with its captor. Then we watched the same entrepreneurs build business opportunities out of the destruction. We stood witness to the engineering works that managed to bury the river once again. We were not able to stop them, or resist, because the speed of the expressways rushing along the riverside hampers any considered thought. They plundered the stone and sand of its sepulcher to use as construction materials. Today we stand thirsty as the withered body of the river is scattered throughout the city.

About the Artist
Alejandro Cartagena, Mexican (b. 1977, Santo Domingo, Dominican Republic) lives and works in Monterrey, Mexico. His projects employ landscape and portraiture as a means to examine social, urban and environmental issues. Cartagena’s work has been exhibited internationally in more than 50 group and individual exhibitions in spaces including the the Fondation Cartier pour l’art contemporain in Paris and the CCCB in Barcelona, and his work is in the collections of several museums including the San Francisco MOMA, the Museum of Contemporary Photography in Chicago, the Portland Museum of Art, The West Collection, the Coppel collection, the FEMSA collection, Museum of Fine Arts in Houston, the George Eastman House and the Santa Barbara Museum of Art and among others.
https://alejandrocartagena.com/h/home/

About the Publisher
This photobook was self-published by Alejandro Cartagena.