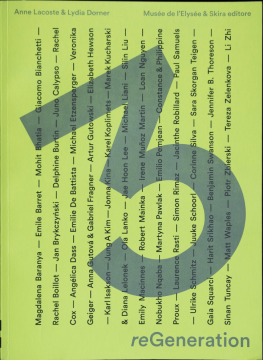 reGeneration – an innovative international project devoted to the emerging photographic scene launched in 2005 – represents one of the hallmarks of the Musee de l’Elysee. Although many similar projects have seen the day since then, the Musee de l’Elysee decided to embark on a third edition on the occasion of its 30th anniversary, one that would focus on the multifaceted nature of photography.

Almost one hundred art academies worldwide responded to our call for applications and submitted up to five portfolios of the best work of their recently graduated students. After a careful review of the 400 applications submitted, three major themes were identified as being representative of the emerging art scene: the variety of approaches for dealing with documentary subjects; the question of memory; and the wealth of aesthetic photographic expressions inspired by the history of the medium and, more broadly, the history of art.

reGeneration3 brings together 50 artists with 25 different nationalities, representing some 40 art institutions. Their work is distinguished by their multidisciplinarity, ranging from printing and photographic series, artists’ books, multimedia installations, videos, projections, films and performances, to on-site installations.

The format of the book devoted to reGeneration3 takes the ever-growing popularity of the photography book into account. With its 184 pages, the book is designed by graphic artists from the Supero studios and coproduced by Editions Skira. It testifies to the museum’s interest in artists’ books and to its commitment to giving priority to the image. The integration of augmented reality in the two versions of the book – French and English – allows access to the video and multimedia works presented in the exhibition. The texts can be found at the end of the book. They include a postface by Tatyana Franck, the presentation of this new edition by Anne Lacoste, and biographical and descriptive notes concerning the works of the 50 artists chosen, written by Lydia Dorner, Emilie Delcambre and Saida Bondini.

Anne Lacoste was b orn 1973, Versailles, France. Lives and works in Lausanne, Switzerland. Lacoste, who wrote her Ph.D. thesis on the history of archeological photography, has been a curator at the Musée de l’Elysée since 2011. She worked at Christie’s for five years before starting her career as a curator at the Photography Department of the J. Paul Getty Museum in Los Angeles. Since 2005, her projects have spanned the history of photography with monographs on Felice Beato, Paul Strand, Irving Penn, Luc Delahaye, and Philippe Halsman, and themes such as the portrait, contemporary American photography, the history of the slide, the photo booth, photo collections, and archives.

Lydia Dorner is the Assistant Curator at the Musée de l’Elysée, Lausanne. In her early years at the museum, she assisted the curatorial team on the major exhibitions such as: Howard Greenberg, Collection (2013),  Philippe Halsman, Astonish me! (2014), and William Eggleston, From Black and White to Color (2015). In 2015, she co-curated the third edition of regeneration, an exhibition and book project dedicated to the emerging photographic scene. She has also curated Paolo Woods, State (2013) and Martin Kollar, Provisional Arrangement (2016). Currently, she is working on an exhibition and book project about the history of the photobooks for children for 2018.
Lydia Dorner has taken part in several publications dedicated to photography; as contributing author to the Dictionary of Photography (Thames & Hudson, 2015), reGeneration3: Which approaches for photography? (Skira Editore/ Musée de l’Elysée, 2015), Philippe Halsman, Astonish me! (Editions Photosynthèses/ Musée de l’Elysée, 2014), and the children’s book, Des photos à lire et à compter (Musée de l’Elysée, 2015).

Lydia Dorner has degrees in both Art History and French Literature. Her current areas of research include the relationship between text and image, family photography, and re-appropriations of icons of Art History.

About the Publishers
The Musée de l’Elysée in Lausanne is one of the very first European museums to be entirely dedicated to photography and the image.

The publications by the Musée de l’Elysée are the continuity of the museum’s exhibitions and accompany all museum’s activities. A lot of books are published every year, some including original material. The plurality of publications allows for an encounter between genres.

In 2016, the Musée de l’Elysée launches his « Collection – Musée de l’Elysée » in partnership with the Éditions Noir sur Blanc in Lausanne. The museum’s catalogues, designed by Marie Lusa Studio (Zurich, CH), are now all in the same format, and assure a continuity and a visual coherence between the titles, in order to create a strong and long-term editorial identity.

This strategy of serial publication is also shared by the magazine ELSE, which design is similar. Twice a year, in June and November, the magazine ELSE presents about ten series and portfolios, mainly of emergent and unpublished photographers, introduced by eminent photography specialists from all around the world.

Established by Albert Skira in Lausanne in 1928, Skira’s first published editions are legendary: the Metamorphoses by Ovid, illustrated by Pablo Picasso with thirty original engravings, and the Poèsies by Stèphane Mallarmè, accompanied by twenty-nine gravures by Henri Matisse. Today, Skira is probably the most important publisher of catalogues for major events around the globe, with at least 50 major titles each year. But the company is also, and above all, the most important player in Italy regarding the conception and production of exhibitions.