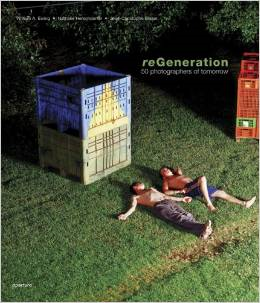 What are young photographers up to at the outset of the twenty-first century? How do they see the world? How much do they respect, build on or reject tradition? Are they busy in the darkroom or in the computer lab–or both? reGeneration sets out to discover answers to these intriguing questions, previewing the work of 50 photographers who may well emerge as some of the finest of their generation. This remarkable book, the broadest and most enterprising survey of its kind, showcases the creativity, ingenuity and inspiration of these up-and-coming artists in over 200 superb images. Curators at the world-renowned Musee de l’Elysee in Lausanne, France, selected the featured photographers from hundreds of candidates submitted by more than 60 of the world’s top photography schools. The panel’s choice was made with one key question in mind: are these images likely to be known in 20 years’ time? The results show that, as the new century builds momentum, the art of photography is alive and well, and photographers of extraordinary talent are already making their mark.

About the Artist(s):
Jean-Christophe Blaser spent many years as a curator at the Musée de l’Elysée, Lausanne, where he contributed as a curator of exhibition design and participated in the management of the museum’s collections and library. He was co-curator of the exhibition reGeneration: 50 photographers of tomorrow, presented in Europe, the United States and China. An art historian by training, he regularly publishes, as a critic, essays in the press as well as in the catalogs of museums and art centers. Independent curator of exhibitions of photography and contemporary art, he is president of Kunstart, association that manages the CAN, Art Center of Neuchâtel.

William A. Ewing is a well-known curator and writer on photography. From 1977 to 1984 he was Director of Exhibitions at the International Center of Photography, New York, and between 1996 and 2010 he was Director of the Musée de l’Elysée, Lausanne. His exhibitions have been shown at many museums in America and Europe, including the Museum of Modern Art, New York; the Centre Pompidou, Paris; the Hayward Gallery and the Serpentine Gallery, London; the Kunsthaus Zürich; and the Montreal Museum of Fine Arts. His recent books include The Body, The Century of the Body, and Face: The New Photographic Portrait. He has also co-authored, with Brandow and Herschdorfer, two Edward Steichen publications: Edward Steichen: Lives in Photography and Edward Steichen: In High Fashion, the Condé Nast Years 1923-1937. Mr Ewing is also Director of Curatorial Projects for the international publishing house, Thames & Hudson. His most recent publications are Landmark: The Fields of Landscape Photography (Thames and Hudson, 2014), Edward Burtynsky: Essential Elements (Thames and Hudson, 2016), and William Wegman: Being Human (Thames and Hudson, 2017).

About the Author:
Nathalie Herschdorfer is an art historian specialized in history of photography. Curator at FEP, she is also Director of the Museum of Fine Arts, Le Locle, Switzerland. In 2010 she was named director of the photography festival Alt. +1000 in Switzerland for which she curated two years of programming. Previously, she was a curator at the Musée de l’Elysée in Lausanne, where she worked for twelve years on major exhibitions, including Face: the Death of the Portrait, and retrospectives of Edward Steichen, Leonard Freed, Ray K. Metzker and Valérie Belin. She is the author of Afterwards: Contemporary Photography Confronting the Past (2011), editor of Le Corbusier and the Power of Photography (2012) and co-author, with William A. Ewing, of reGeneration: Tomorrow’s Photographers Today, two books dedicated to emerging photography on the international scene. Among her recent projects are a dictionary of photography including over 1,200 concise yet fully detailed entries on all aspects of the subject (Thames & Hudson/Editions de La Martinière, 2015), the book “NewSwissArchitecture” (2015), and Coming into Fashion: A Century of Photography at Condé Nast, a travelling exhibition produced by FEP and accompanied by a book published in 6 editions.

About the Publisher:
Aperture, a not-for-profit foundation, connects the photo community and its audiences with the most inspiring work, the sharpest ideas, and with each other—in print, in person, and online. Created in 1952 by photographers and writers as “common ground for the advancement of photography,” Aperture today is a multi-platform publisher and center for the photo community.
aperture.org