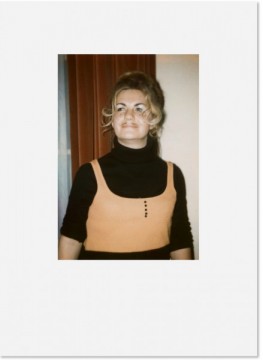 Mariken Wessels’ second artist book is titled Queen Ann. P.S. Belly Cut Off. The photographs in this book are sourced from an existing person, a middle-aged woman wringing with her self-image in an endless stream of manipulated photographs of herself, making them into a true cabinet of curiosities. The authentic arrangement of the discovered material, with its strange mixture of old and new photographs, film material and collages is strikingly deceptive. In fact, both in Elisabeth – I want to Eat – as well as in Queen Ann. P.S. Belly cut off, it is the hand of the fine craftswoman Mariken Wessels at work.

The suggestive, intimate force of the ‘found’ photographic material and other personal documents, as well as the sequencing of the images as a whole, are both deliberately arranged with great precision. Wessels sensitively appropriates the photo and film material by newly photographing, editing, and re-organizing them, often incorporating other material in a complementary gesture. In doing so, she constructs a narrative, weaving together images in the medium of the book.

In Queen Ann. P.S. Belly Cut Off it is the unfolding of a melancholic narrative of a woman, whose life seems to be dominated by her obesity. Yet the reader is never turned into a voyeur. ‘Queen Ann’s’ peculiar and touching photo collages of herself, expressing a longing for another ‘being’, are fused with the image that the book evokes around her persona. In the contrast which the arrangement of the photos make all too evident, an uncomfortable incompatibility emerges between the present and the past life of Ann and the status of being beautiful. Wessels breathes new life into her protagonist, blurring the lines between fiction and reality, giving way in the process to a seemingly ‘higher’ reality.

Mariken Wessels was born in Vlaardingen, The Netherlands, 1963, and was raised in Breda. She now lives and works in Amsterdam.
www.marikenwessels.com

Alauda Publications is an Amsterdam-based internationally operating publishing house, founded in 2009, concentrating in the field of contemporary art, culture and theory.