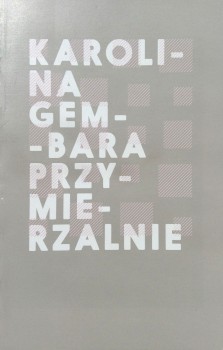 ‘This work comes from having a strong sense of not quite fitting into the mould, of living on a trajectory that is not the norm, being curious for what could have been.

Looking for lives I wanted to ‘try on’ I had one condition: a husband/wife, a relationship, kids, dogs, cats, a house, an apartment, a mortgage. A home. Not necessarily all at one time, or in that order. But some attribute of ‘stabilisation’ must have been present. In whatever configuration. Age: plus/minus 30. Polish. Like me.
I found people, who, to various extent represent and inhabit a sedate model of life, one that could have been mine as I was born, raised and educated in similar circumstances. But something, somewhere, diverged from that steady progression and my life doesn’t quite fit into the parameters of the social figures I have been looking at.
How a family functions, what time to bathe your children, a natural delivery or c-section, which bank gives you the best loan, where to go for holidays, how much are vaccinations for – if I happen to know these things it’s not from my own experience. My experience is to live out of a suitcase, transiting through the homes of friends and family, changing continents every couple of months.
I invited myself to these houses to ‘try on’ the lives of my friends, to see how I look in their seemingly routine outfits. I asked her (the girl/women/mother) to photograph me with her husband, boyfriend, with her baby, in her bed, kitchen, bathroom. For just as long as it takes to shoot one or two rolls of film, and on those very rolls of film, I became her. Or rather I made an attempt to. Sometimes the dream cut does not suit us perfectly.’

Karolina Gembara is a documentary photographer living and working between Delhi and Warsaw. She studied International Relations, Journalism and Photography, and is a participant of Mentoring Programme with Sputnik Photos and Rafal Milach. Her work has been exhibited during Parallel Cities (2013, New Delhi), PhotoIreland (2014, Dublin), Angkor Photo Festival BlowUp! (2014, Siem Reap). Her first book ‘Fitting Rooms’ was published in December 2013. In 2015 she was nominated to Prix Pictet.
www.karolinagembara.com