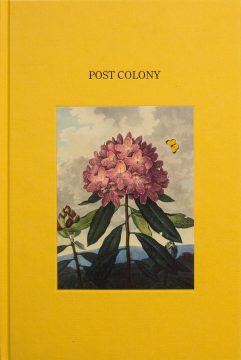 First introduced to Ireland in the 1700’s as an ornamental landscape feature, this plant has become deeply problematic within the national park and across many celebrated landscapes of Ireland and the British Isles, threatening native species. Ironically the invasive plant, a hybrid creation of the eighteenth century botanical nursery, has also become an iconic touristic image in the park, with its prolific purple blooms. Kennedy presents a speculative history of the park landscape from the Plantation of Munster in the late 16th Century to the park’s current status as a tourist destination and special area of conservation.
This book is an accompaniment to the main body of work, a short film entitled Post Colony. The book features texts from Ciaran Nugent, a forester, Fanny Michel, an anthropologist, and Gareth Kennedy. Production photographs are by Brian Cregan. Other contributors include Benjamin Just, Teah O’Neill, Claire Nicholl, Nollaig Molloy, Dolores Lyne, Matthew Jebb, Jane Stout and Eoin Donnelly.

About the Artists
Gareth Kennedy’s work is invested in a socially engaged practice which addresses specific environmental, social, aesthetic and economic concerns within located contexts. Over the last few years, he has been developing an anthropological aesthetic to generate ‘folk fictions’. These works draw on the social, cultural and economic history of a people and a place to craft work that is a meaningful composite of these histories. This method has entailed working with such diverse professionals as archeologists, anthropologists, film archivists, museum directors, folklorists and scientists as well as festival organizers, craftspeople, fishermen and park rangers amongst others. He envisages contemporary art as a powerful mode of generating meaningful new associations within contexts as well as producing new knowledge through its processes.
gkennedy.info

Brian Cregan is a documentary/fine art photographer interested in themes relating to landscape, the city, natural history and the suburban garden. Ideas around ritual and ‘a sense of place’ are key elements in his work, that takes photography as a starting point to build narratives around what is often overlooked or taken for granted
He is a graduate of the Photography B.A. programme in the Dublin Institute of Technology. In 2012 Cregan received the Emerging Artist Award from Kildare Co. Council that culminated in a solo show in the Riverbank arts centre. His work has been selected for The Salon Art Prize in London in 2012 and Describing Architecture 2013. It has also been featured in The Irish Arts Review, The Irish Times, Dezeen, Inhabitat, Architecture Journal Online, A10 magazine and Architecture Ireland.
briancreganphotography.com