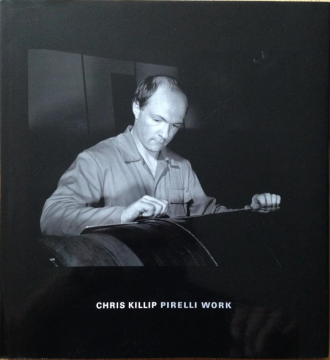 This photobook follows photographer Chris Killip’s journey into understanding the world of manufacturing through a photo study of industrial sites. This book is edited by Clive Dilnot.

Quote from Chris Killip: “I wanted to show the manufacturing process as clearly as I could, and to do so in this factory meant it would have to be lit. Ironically, my stubbornness in trying to avoid lighting would now have its own unexpected rewards. Because of the desperate amount of time that I had spent there, I knew in a visual way the processes of the factory; the rhythms and cycles of the machines, the movement and steps that the operators had to take, the movement that the processes predetermined for them. I began again, re-photographing the factory using lights, sometimes three or four lights triggered by remote control devices. The main light, which was the one balanced to light the subject, was often held on a pole by my friend, away from the camera, mimicking the fashion techniques that I knew from my past. I now understood and knew what I wanted to do. The workplace had become, in a real sense for me, a theater and I embraced the look of these new photographs with their relation to fashion, film noir, and even Soviet realism. For me this ‘look’ seemed a more telling way to record and document this enforced ritual.”

Over the decades Steidl at Düstere Strasse 4 in Göttingen has become one of the most respected printers in the international publishing world. Whether photography, art, fashion or literature, it is Steidl’s goal to realize the dreams and goals of artists and authors, and to create art in book form.