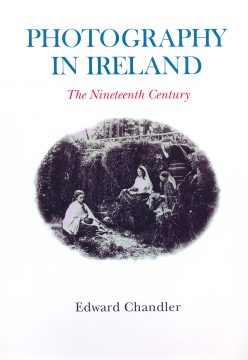 This generously illustrated, attractively produced book, demonstrates that from the very start in 1839, and throughout the nineteenth century, Irish photographers not only sustained but also added to the predominant currents along photography’s evolutionary path both philosophically and technically.

About the Author
[pending]

About the Publisher
When proprietor Éamonn de Búrca emigrated from the West of Ireland to England in 1968, he carried with him his most prized possession: an 1862 copy of The History of Ireland by Thomas Moore, which he bought for IR£1 (€1.27). ‘That was the start of my bibliomania. I have been collecting ever since,’ says Éamonn. Since setting up De Búrca Rare Books in 1981, Éamonn has become one of the leading specialist in books of Irish interest. Now joined by his son, Will, this friendly family business has expanded to encompass books that range from very rare earliest printings to modern first editions.