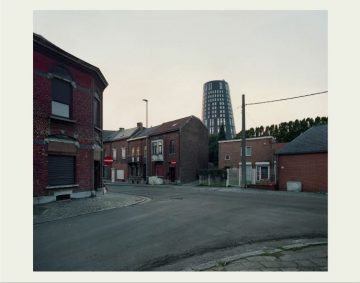 The eponymous “peripher” functions in the works of Andreas Tschersich, a Swiss artist based in Berlin for 14 years now, as a structural, aesthetic and mental moment. It refers to places of transit and transition that defy unequivocal classification, standardization and demarcation. Tschersich portrays cityscapes in which people, upkeep, habits and uses always remain hidden. The tenor remains the same regardless of whether the scene is set in Charleroi, Liverpool, New York or Tokyo. Tschersich’s pictures are universal and never seem foreign or forbidding, but ever familiar in their everyday banality, even to those who’ve never been there before.

Tschersich is always on the lookout for motifs, to be sure, but sometimes they just come to him by serendipity. He is a master of the art of losing his way and making the most of that lost state as a creative moment. As he roams the city, sometimes it’s simply there all of a sudden: that feeling he seeks to convey in his photographs. It is the perception of that touch-andgo moment when everything hangs in the balance, the instant before a fateful decision is to be reached: dereliction or gentrification, danger or safety. Anything can happen to Tschersich’s locations. He is averse to calling his pictures architectural photographs or seeing any direct ties to Bernd and Hilla Becher’s work, although his own work is clearly in line with the photographic tradition of recording man’s relationship to his (built) environment since the second half of the 20th century.

In order to keep as close as possible to the “human gaze”, the experience of an instant, he makes use of a method of digital montage invisible to the viewer. He puts several medium-sized negatives together to form one big picture in order to portray larger sections without distorting the perspective, which would be inevitable in a mechanically constructed single-shot exposure using a large format camera. In a word, Andreas Tschersich makes use of technology not to falsify reality, but to “cling to it as closely as possible”.