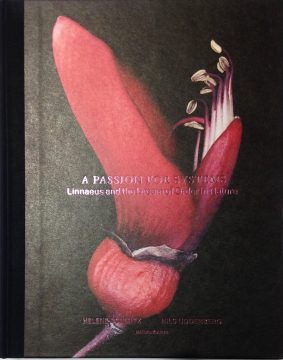 Linnaeus introduced his pioneering sexual systems for plants for the first time in 1735. His contemporaries were shocked by Linnaeus’ frank comparisons with the sexual reproduction system of human beings but his useful scheme rather quickly took the world by storm. Helene Schmitz’ beautiful and unique photographs depict the sexual system organised in the 24 original categories. Nils Uddenberg’s inspiring words enable us to follow Linnaeus from his youth growing up in Stenbrohult, a town in the region of Småland, to esteemed professor in Uppsala of worldwide repute. Pia Östensson, a biologist working at the Swedish Museum of Natural History, is scientific consultant and captions author.
“A Passion for Systems” was the Linnaeus Tercentenary’s official anniversary book and was published in Swedish, English and Japanese.

About the Artist:
Helene Schmitz has a BA in Art and Film Science and works as a photographer in Stockholm. Previous work includes “Living Rooms”, shown in Gallery Aronowitsch in Stockholm (1996) and “Let’s talk about the pain” in Galeri Leger in Malmö (2001).
heleneschmitz.se

About the Publisher:
The publishing house Natur & Kultur was founded in 1922 by Johan Hansson (the son of a smallholder) and his wife Jenny Bergqvist Hansson. Johan and Jenny wanted to build a publishing house governed by ideas, with part of the published works focusing on education in areas of psychology, health and natural science.
nok.se