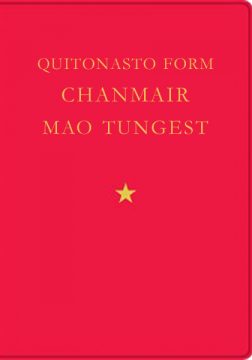 Party. Quotations from Chairman Mao TseTung is a photobook built upon the skeleton of Chairman Mao’s Little Red Book. It was conceived by photographer Cristina de Middel after her first trip to China, which took place in 2012 and for which she set the intention of reacting with the camera to whatever caught her attention, without any attempt to analyse or explain.

De Middel returned from China with an extensive series of photographs which at first she found hard to classify and edit, since their only common denominator was her own astonishment. But she soon realised that their very resistance to classification was the key to their ability to show us what China is today.

She decided to adapt Chairman Mao TseTung’s Little Red Book (which in the 1960s was the single most visible icon in mainland China, even more visible than the image of Chairman Mao himself) as a framework for the photographs to create a narrative for modern times. Censoring or hiding parts of the original text and highlighting and altering other parts, she presents a portrait of the People’s Republic of China in the 21st century.