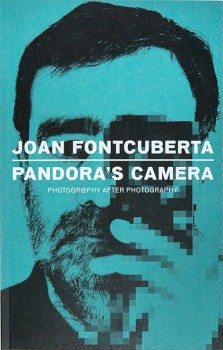 This book is the first English translation of a renowned collection of essays by Joan Fontcuberta, in which he considers the technological shift that photography has undergone in recent years. The medium finds itself torn between loss and hope, between the disappearance of the silver gelatin photograph and the possibilities of the digital medium. Fontcuberta uses the motif of Pandora’s box to conceptualise the capricious nature of photography, its fickle relationship to truth – employing the Greek myth concerning a large jar containing myriad forms of human unhappiness, or blessings, depending on the version you read. As Pandora’s camera, digital technology spells calamity to some and liberation to others; it is blamed for irretrievably discrediting veracity, but at the same time it introduces a new degree of truth.

In his signature ironic style and playful tone, Fontcuberta examines the new principles that have arisen within the digital ecosystem, in jocular essays such as ‘I Knew the Spice Girls’ or ‘The Mystery of the Missing Nipple’. His critical reflections and poetic evocations are inspired by the hope that still remains in the notion of a postmodern Pandora’s camera – one that might not only describe our environment, but also bring transparency to it.