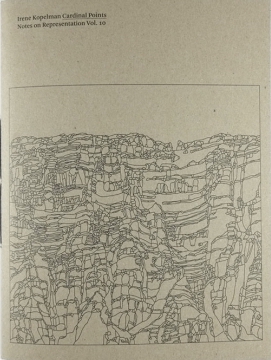 Cardinal Points, the 10th volume in the series Notes on Representation, charts Kopelman’s investigations through drawing, writing, and taking photographs on several trips in Argentina where she joined the research campaigns of different groups of scientists: to Pampa de Achala, Cordoba, working with biologists on invasive terrestrial species and studies of litter; to El Litoral, to the provinces of Entre Rios and Corrientes, with a team of ecologists studying floral ecology; to a lab in Puerto Madryn in the Patagonian region, with a team that works with invasions of marine organisms; and to the Ischigualasto Provincial Park and Jachal in the province of San Juan, with a team of geologists and palaeontologists.

About the Artist
Irene Kopelman was born in Cordoba, Argentina, in 1974. She studied at the School of Arts at the National University of Cordoba where she obtained her bachelor’s and master’s degree in painting (1994 – 2002). In 2002, Kopelman was accepted within the two-year international residency program at the Rijksakademie van beeldende Kunsten in Amsterdam. She currently divides her time between Amsterdam, Argentina and the regions where her work and research take her.
irenekopelman.com

About the Publisher
Roma Publications is an Amsterdam based art publisher, founded in 1998 by graphic designer Roger Willems, and artists Mark Manders and Marc Nagtzaam. It is used as a platform to produce and distribute autonomous publications made in close collaboration with a growing number of artists, institutions, writers and designers. Related to the content, every issue has its own rule of appearance and distribution, varying from house to house papers to exclusive books. The publications so far are in editions between 2 and 150,000 copies. Occasionally, Roma also curates exhibitions.
romapublications.org