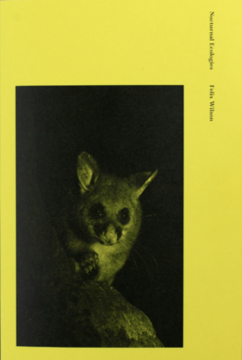 The nocturnal city is awash with a multitude of complex and layered connections spanning nature, the built environment, electricity, life and light. The illuminated buildings, streets, gardens and public spaces that characterise the city of Melbourne, Australia – the adopted home of photographer and researcher Felix Wilson – tie its inhabitants to the immense brown coal mines and power stations of the Latrobe Valley, some 150 kilometres east, via a vast network of electrical infrastructure. By embarking in the process of burning brown coal – a substance that was formed from vegetation that grew more than 25 million years ago, which can be traced though fossilised remains found during the mining process – we artificially irradiate our modern city, decimate species, and in-turn, entwine our contemporary pursuits and follies with that of deep time.

Hinting towards Allan Sekula’s more speculative mode of photographic enquiry – in league with American anthropologist Anna Tsing and late Australian philosopher and eco-feminist Val Plumwood’s broader perspectives on ecology – Wilson’s debut book Nocturnal Ecologies doesn’t so much make a case or establish a steadfast position in this wider schema. Rather, his poetic, at times quietly playful constellations of monochromatic images engage nonhuman and animal actors to pose questions, offer juxtapositions and draw connections. In Wilson’s ecology of images, native Australian possums, insects, bats and city plants converse with the fossilised remains of kangaroos from the Latrobe Valley and vegetative forms found in brown coal. In doing so Nocturnal Ecologies offers a series of conduits between our present lived experience and one of which the residual evidence can only be found deep in the ground.

Felix Wilson graduated from the Tasmanian College of the Arts, University of Tasmania with a First Class Honours in 2013. His work explores contemporary relations with non human species particularly as they occur in places that exist as boundaries between the built environment and what might be considered natural places. For Wilson it is in the edges and liminal spaces that we can begin to re-conceptualise our place in the world, as interlinked and interdependent beings, engaged and implicitly a part of what Timothy Morton describes as ‘the mesh of life forms”. Using video, sound and photography, the work asks viewers to engage with their own perceptual processes and to understand their relations with the quiet vitality of the non-human in new ways.