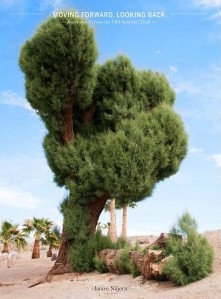 Moving Forward, Looking Back: Journeys Across the Old Spanish Trail started in March 2014 with a road trip across the Southwest of the Spanish photojournalist Janire Nájera.
She and her assistant Matt Wright followed the footsteps of trader Antonio Armijo, who opened the route of the Old Spanish Trail between the states of New Mexico and California in the 19th century.
During her trip, Janire met and interviewed Spanish descendants to analyze how the traditions of the first settlers have merged with local cultures influencing the creation and identity of today’s pueblos and cities, revealing some traces of Spanish intangible heritage that remains across these states.

Nájera has captured her experience along the route in a daily log, a book and a photography exhibition that will travel across the U.S. and that premieres at the Former Residence of the Ambassadors of Spain in Washington, D.C.
www.janirenajera.com

This project is the result of a long collaboration between Janire Nájera and SPAIN arts & culture, which began with an open call posted on the digital platform SPAINred.