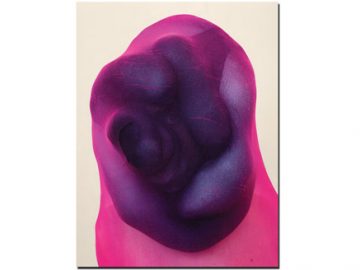 Published to coincide with her major exhibition at the National Gallery of Victoria (NGV) in Melbourne, Polly Borland’s new book Morph offers an incisive new vantage on the celebrated Australian-born, Los Angeles-based photographer’s explorations of anthropomorphic soft-sculpture and abstracted portraiture. The new series of works – which were made in collaboration with model Sibylla Phipps, who also contributes a compelling psychoanalytic text to the book – serves as a dramatic, almost surrealistic expansion of Borland’s visual language, with her attention to colour and reimagining of form coming to the fore. At once tender and troubling, the works that populate Morph, the artist’s second book for Perimeter Editions, are poignantly human and pointedly not.

About the Artist
Polly Borland is one of Australia’s foremost photographic artists. Famed for her early editorial work and portraiture – which saw her photograph the likes of Queen Elizabeth II, Nick Cave, Donald Trump, Susan Sontag, Monica Lewinsky and Cate Blanchett for a host of clients such as The Guardian, The New York Times and The New Yorker – her art practice has seen her exhibit widely in Australia, the UK, Europe and the United States, including the major exhibition Polyverse at the National Gallery of Victoria, Melbourne, in late 2018. Her books include The Babies (2000), Bunny (2008), Smudge (2010) and YOU (Perimeter Editions, 2013).