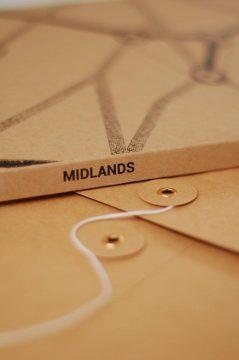 Over a ten year period ‘Midlands’ has explored and mapped the physical transitions which are as a direct consequence of the promise of the National Spatial Strategy, and the physical effects of the failures of this plan – from 2004, until it was abandoned in 2013. The work began at the height of the Celtic Tiger period – the promises of re-populating and re-generating the midlands region were, on paper, strategically created to give economic stability to the region.

The disputed territory of the Midlands was allocated a number of major strategic infrastructural projects designed to transform the region. An inter-triangulation of “gateways” and “Hubs” in the central part of the Country were designed to kick-start an economic revival and encourage a dynamic regeneration and re-population of what was seen as a potential core area of the country.

Throughout the cycles of economic and cultural change, ‘Midlands’  charted and represented the changes in and on the landscape – from the promise of progress, through the frustrations of stagnation and subsequently to the anguish of collapse. Through this time, the work documented the cyclical processes of erasure, construction, abandonment and decay that are evident on the rural landscape. While ‘Midlands’ represents topographic alterations which were both subtle and monumental, minute and large scale over this period of time, the work also represents the porous nature of the imagined borders of the region itself, questioning the very concept of what the ‘Midlands’ is – an undetermined geographical entity, under constant construction and re-definition.

About the Artist
Martin Cregg is an Irish photographer and educator living in Dublin.
martincreggphotography.com

About the Publisher
Read That Image is a collective of creatives dedicated to educating, consulting and promoting self publishing photobooks.
readthatimage.org