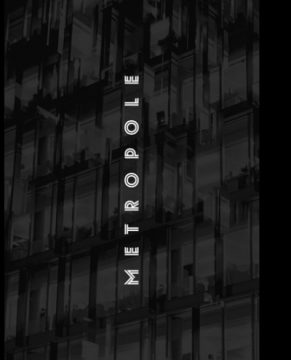 Metropole is a document of the brutal uprooting of London’s foundations at the hands of corporate developers, for the benefit of wealthy investors and absentee property speculators. In the wake of aggressive high-end development, genuinely affordable housing has diminished and residents of London are pushed ever further out from the core. Photographed over dozens of winter nights spent wandering through the escalating city, Metropole records the dizzying effects of a capital influx on London. The frameworks of luxury residential towers are documented during construction, and the use of double exposures layers building upon building. This proliferating tangle mirrors the threatening scale of alteration in the city. Perspective and orientation are lost in the process, emulating the sense of loss that many Londoners now feel.

Lewis Bush is a photographer, writer, researcher, and educator. Born in London, he studied at the University of Warwick and worked as a consultant researcher with the United Nations HIV/AIDS taskforce, before starting to practice documentary photography in 2012. In his work Bush seeks to draw attention to forms of invisible power that operate in the world. Bush works from the standpoint that power is always problematic because it’s natural resting state is arbitrary and untransparent. Regardless of the intentions of the people and institutions possessing power, this is the state to which it constantly seeks to return.
lewisbush.com

Overlapse is an independent visual arts and photobooks publisher. They collaborate closely with photographers and artists to create unique, desirable, and beautifully produced books that highlight enduring and universal themes.
overlapse.com