The Mecca of Coney Island 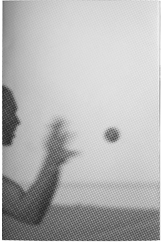 In the opening scenes of the first ‘Rocky’ (1976), Balboa is always holding a handball ball. For the aspiring boxer, a perfect archetype of the crude and penniless hero and destined to achieve the ‘American dream’, that is probably a simple exercise to train reflexes and a form of escapism from the problems of a difficult life. A game reminiscent of childhood, that contrasts with his bully appearance, highlighting a more sensitive side. I don’t know if the characters portrayed by Fabrizio Albertini have the same desire for social advancement or the same sensibility of Sylvester Stallone, but I see in them a certain kind of swagger, an attitude of defiance. Yet they didn’t seem very young and they appear to belong to different social classes, although giving the idea of a community, with its own rituals.It also takes little to play: an open space and a concrete wall to bounce the ball on. A game that can get pretty darn serious. You’re in a place where for 50 years the best players have been meeting, the ‘Kings of Coney Island’, to see who is the champion of this exciting challenge, demanding and at times brutal, very similar to boxing if it wasn’t for the ball. Maybe that’s why many of them behold the ‘eyes of the Tiger’…
Welcome to Coney Island.
Welcome to Mecca!

Born in 1984, Albertini lives on Lake Maggiore (Italy). He graduated in Film Direction and Production at the Conservatorio Internazionale Scienze Audiovisive in Lugano, and during the years of study his several short movies were selected at the International Locarno Film Festival and Solothurner Filmtage. In 2014 he finalized the photographic series “Genius Loci” and “The Mecca of Coney Island”, in progress since 2011.
www.fabrizioalbertini.com