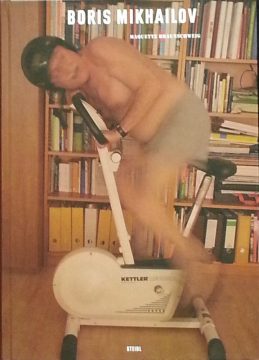 Maquette Braunschweig is Boris Mikhailov’s analysis of Germany’s political and demographic development. In 2008 he closely followed the production of Aeschylus’ The Persians in Braunschweig. The public took part, forming the typical ancient Greek chorus and the production was a symbolic play about war and the documentation of a young democracy.

Mikhailov was also a part of the production process and he developed an oeuvre in four acts: “German Portraits”, “Shooting”, “Bus Stop” and “Home T(h)eatre”. In a city where the number of young people and children is constantly decreasing, Mikhailov takes a close look at the weak points and the margins of this community and paints a unique and clairvoyant picture of Germany’s future.

About the Publisher:
Gerhard Steidl began working as a printer and designer in 1968. From political non-fiction he then expanded into literature and selected books on art and photography. Steidl publishes German literature as well as translations from French, English and Icelandic.