KA-BOOM The Explosion of the Landscape 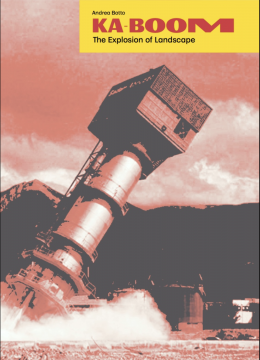 KA-BOOM The Explosion of the Landscape
Andrea Botto
Editions Bessard

KA-BOOM is a fictional explosive manual in which sourced vintage photographs encounter staged do-it-yourself explosive construction images, with the photographs Andrea Botto has shot of real non-military explosions. The result is a sophisticated enquiry of photography’s contemporary status, in which numerous questions are raised and no simple answers are given. (…) The project is articulated through a mechanism whereby any notion of the authentic becomes almost impossible allowing the turn-over between fiction, reality and staging to manifest a form of resistance to the idea that the spectacle just is, suggesting criticality and memory as means of opposition. Recalling the structure of Bertold Brecht’s diaries and their use of photography as a form of multi-disciplinary media, capable both of seducing and estranging the viewer-reader, Andrea Botto attempts to transform images in means capable of activating processes of knowledge. (…) The structure of the book cancels any illusion of continuity and pushes the viewer to take a position, to reflect on the images and their development.

About the Artist
Andrea Botto (Rapallo, 1973), is an Italian fine-art photographer and lecturer, graduated in 1997 at Istituto Europeo di Design, Turin. Interested in the cross-pollination of various contemporary art mediums, he uses photography as a means of dissecting the world in order to express its complexity and to expose its stratifications. Time, collective imaginary, as well as the current transformations that mark the present age, are the key themes of his work, which explores the unstable equilibrium that governs the landscape, through the aesthetics of destruction. His projects have been acknowledged by grants and awards and have been exhibited in international museums, including Bundeskusthalle in Bonn (2005), Fotomuseum Winterthur (2005), Stiftung Kultur in Cologne (2006), MAXXI in Rome (2007-2016), Fundacion Canal Isabel II in Madrid (2007), MoCA in Shanghai (2010), Villa Croce in Genoa and Benaki Museum in Athens (2015)

About the Publisher
Editions Bessard is a paris-based independant publishing house created by Pierre Bessard in 2011. Focusing on working with artists, writers and curators to realise intellectually challenging projects in book form.