In Between / In Transit 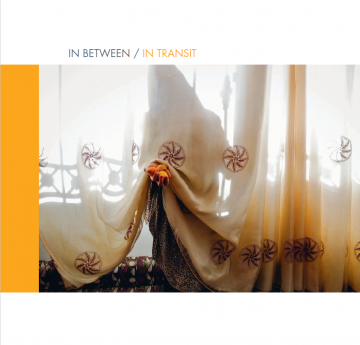 In the 21st century it has become increasingly common to be born into one culture only to re-establish oneself elsewhere for a variety of reasons. Most recently, we have witnessed this transience through a multitude of news reports covering the journeys of thousands of refugees fleeing from war torn countries.
In Between / In Transit presents works by a group of artists whose focus rests on this tentative, limbo-like experience. Each project engages a different narrative and reflects on how civilization is constantly shifting.  Utilizing photography, performance and filmmaking, each body of work examines the experiences of those thrust into a culture that is markedly different from their own. Their stories illustrate the challenges faced, both physically and psychologically, revealed in ways that go far beyond what is recognized as ‘traditional documentation’ or classic photojournalism.

About the Artists:
Gohar Dashti received her M.A in Photography from the Fine Art University of Tehran in 2005. She has developed a practice concerning social issues with particular references to history and culture in modern society.She creates artwork using different media such as photography and video. She has participated in several art residencies and scholarships such as DAAD award, UdK Berlin, DE (2009-2011); Visiting Arts (1mile2 project), Bradford/London, UK (2009) and International Arts & Artists (Art Bridge), Washington DC, USA (2008).She has held various exhibitions around the world, being shown in many museums, festivals and biennales. Her works are in many collections including Victoria and Albert Museum, London (UK), Mori Art Museum, Tokyo (JP), Museum of Fine Arts (MFA), Boston (USA), Nelson-Atkins Museum of Art, Kansas City (USA), National Gallery of Art, Washington D.C. (USA) and Kadist Art Foundation, Paris (FR)
gohardashti.com

Omar Imam is a Beirut-based, Syrian photographer and filmmaker. In his photographic works, Imam uses irony and a conceptual approach to respond to the violent situation in Syria and he often has to publish his work under a pseudonym. After leaving Damascus in late 2012, he began making fictional short films that often focus on the Syrian refugee experience. Individually and with NGOs, he has produced films, photography projects, and workshops for Syrian refugees in Lebanon and was a grantee of the Arab Fund for Arts and Culture (AFAC) in 2014.
arabdocphotography.org

Tanya Habjouqa was born in Jordan and educated in Texas.   Habjouqa’s photographs focus on gender, social, and human rights issues in the Middle East. In 2014 she won a World Press Award for her series documenting the many ludicrous moments of everyday life that the occupation of the West Bank, Gaza, and East Jerusalem has created.  Her book of this work titled, ‘Occupied Pleasures’ was selected by TIME magazine and the Smithsonian as one of the best photo books of 2015. Tanya is also a founding member of Rawiya photo collective, the first all female photo collective of the Middle East and has received numerous awards, including finalist for the 2014 FotoEvidence Book Award, recipient of a Magnum Foundation Emergency Fund in 2013,  the SND Silver Award for her Gaza story A Life Less Ordinary in 20112, the Clarion Award in 2007 for coverage of the Israel Hezbollah War for Bloomberg and the Global Health Council award for humanitarian photography with her Darfur coverage in 2006. Tanya is represented by Panos Pictures and East Wing Gallery in Dubai.
tanyahabjouqa.com

George Awde was born in Boston of Lebanese origin, he studied painting at the Massachusetts College of Art (2004) and received his MFA in Photography from Yale University School of Art (2009). His awards include the Aaron Siskind Foundation’s Individual Photographer’s Fellowship (2012), Philadelphia Museum of Art’s Photography Portfolio Competition (2012), Fulbright US Scholar Grant to Egypt (2012-2013), Alice Kimball English Travel Fellowship (2009), and The Richard Benson Scholarship for Excellence in Photography (2008). In 2015 Awde was awarded a residency at Light Work in Syracuse, New York and in fall 2015 Awde’s work was exhibited as part of the Primiere Biennale Des Photographes Du Monde Arabe Contemporain in Paris.  George is currently Assistant Professor at Virginia Commonwealth University in Qatar and co-director of marra.tein, a residency and research initiative in Beirut.
georgeawde.com

Stefanie Zofia Schulz was born in Germany and studied in the Ostkreuzschule in Berlin. She has been exhibited at several international Photofestivals, such as the Triennale in Hamburg ,EMoP in Berlin, Voies off in Arles, and Circulation(s) in Paris and her work has been published in multiple international publications. She was recently awarded a scholarship from VG Bildkunst, she works as a freelance photographer and lives in Berlin and Saarland. Her documentary and artistic work focuses on important humanistic issues.
schulzstefanie.de

About the Author:
Peggy Sue Amison is Artistic Director for East Wing – a platform for photography based in Doha & Dubai, UAE. As a curator, writer, strategist, mentor and photographic consultant, Peggy Sue has collaborated with numerous emerging and established photographers, festivals and publications internationally. Before beginning her position at East Wing in 2014, Peggy Sue was Artistic Director of Sirius Arts Centre in Ireland (2001 – 2014) where she headed a multidisciplinary visual arts and residency programme. Working with a wide range of visual artists, but specifically in photography, Peggy Sue has curated exhibitions in Dubai, Ireland, Berlin, Denmark, Poland and China. She has also written for various photographic publications and artist catalogues and has produced independent photographic events. Through her different positions and projects, Peggy Sue works to create synergies between artists and professional organisations. She has been invited speaker, nominator, juror and critic at numerous meeting places for photography and contests. She has also contributed extensively to the development of the artist residency programme, PICTURE BERLIN in Germany and has been a board member and advisor for Belfast Photo Festival in Northern Ireland since 2012.

About the Publisher:
Galleri Image is an exhibition space located in Aarhus, Denmark.
galleriimage.dk

Further Reading
– Information about the exhibition and catalogue