If you Can Piss… 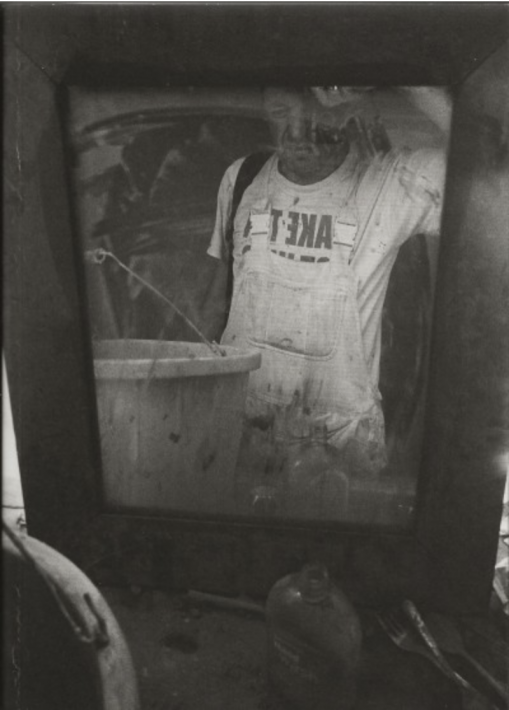 ‘If you can piss, you can paint’. This common expression on building sites captures the camaraderie, humour, and micro-hierarchy of the building trades.

‘I’ve worked as a painter and decorator in London houses for eighteen years, having arrived from Ireland as a Fine Art graduate with artistic ambitions. While trying to gain some recognition for my practice, I began painting and decorating as a pragmatic and necessary segue. I assumed my time at this occupation would be limited, a mere stop gap, but as time passed and I built up skills and contacts, I came to realise this may not be the case. To reclaim some engagement with my practice, I started bringing a small 35mm camera with me to work, photographing my co-workers and our shared labour. It caused me to reflect on my role as both colleague and observer, and how builders – and the wider working class – are invariably misrepresented, and ‘othered’. In documenting our working lives for this series, I recognised the subjectivity of the photographic lens, and the ingrained bias of the art and publishing worlds in their role as mediator. This book is the result of that journey to reconcile my practice, ambitions, and realities of working life. It is also a record of the close friends I have made over the years, and the jobs which have required our collective skills, energy and creativity.

This is something of a rare document, an honest and fair representation of working-class life on building sites produced by a member of that cohort. My essay in the publication reflects on the (in)visibility of builders and their labour – an inherent self-erasure as we complete a pristine job – and how this affects the way builders are perceived and represented.’

David O’Mara is an Irish artist based in London and Kent. A graduate of Waterford Institute of Technology and the National College of Art and Design in Dublin (Sculpture and Art History), O’Mara has won awards and participated in exhibitions in Ireland and the UK.

O’Mara’s artistic practice is concerned with the unwanted and the rejected; he is fascinated by the visual detritus of the urban environment. Over the years O’Mara has been selectively collecting the unwanted fragments that litter the streets of modern cities, because he sees the ubiquitous waste of the consumer society as the residue of an overburdened visual culture.

The rate at which visual images are generated has reached unprecedented levels, and the means of their projection permeates the very fabric of the urban environment. The sheer magnitude of this industry has exceeded the very perceptual capacities of the city dwellers, the target audience, while the incessant bombardment prevents all but a tiny volume to be consumed as intended.
This has resulted in huge swathes of surplus material, disposable media generating endless streams of excess visual material for which there is no use-value.

The acknowledgement of this phenomenon precipitated a crisis in O’Mara’s own working practice, and he struggled to justify his activity when it would only contribute to this confusion of visual messages. This predicament has informed the artist’s interpretation of the found images which he continues to collect in the urban environment.

Jannuzzi Smith Editions are a cross-media design consultancy based in London and Lugano. JSE offer a range of communication design services, supported and enhanced by their innovative use of technology. The consultancy’s aim is to help clients communicate more effectively: improving the impact, consistency and efficiency of their online and printed output. This website outlines a number of the issues that Jannuzzi Smith commonly address, and illustrates the thinking behind some of their solutions.