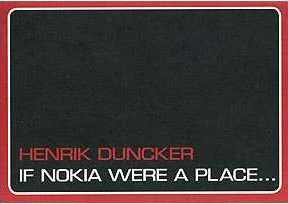 A series from a Finnish town called Nokia. The series toured Germany during 2005-06 as part of Zwischen Traum und Wirklichkeit group show. Selections were shown in another group exhibition during 2003-04 in Germany, Poland, Netherlands and Finland. First solo show was in 2007, in Helsinki, after which the exhibition toured Finnish photographic centres during 2007-2008.
www.henrikduncker.com