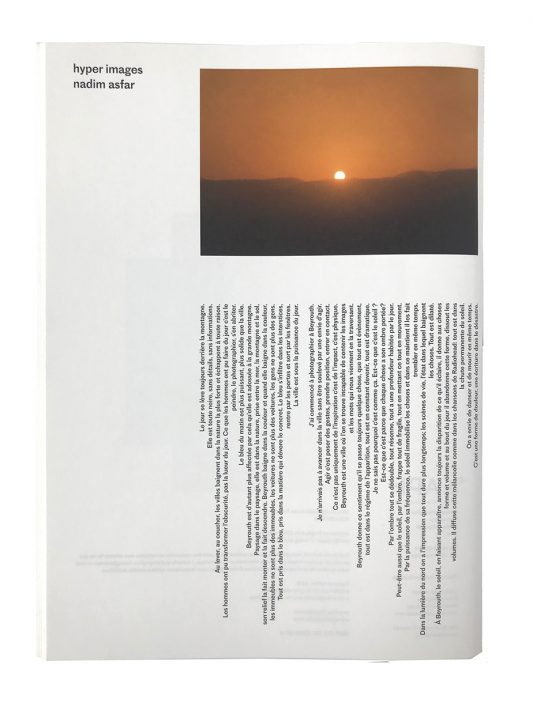 Across a body of work that spans photography, video, and installations, Nadim Asfar’s early works engage with the technical and experimental origins of image-making.
In his book Hyper Images he employs a camera-less photographic technique—the photogram—that is as old as photography itself, to produce a series of floral “photogenic drawings” that are as much records of action as they are still lives disconnected from recognizable spatial and temporal markers.

About the Artist
Nadim Asfar is a French-Lebanese photographer and video artist. Born in Beirut, in 1976, he lives and works in Paris and Beirut. His work has been shown at many international institutions and events, including Paris Photo, the New Museum in New York, the Kunst-Werk Institute in Berlin, and the International Documentary Festival in Marseille. He was appointed the Chevalier des Arts et des Lettres distinction by French Ministry of Culture in 2014. His work is part of major international public and private collections. Nadim Asfar’s early work is characterized by an engagement with the technical and experimental origins of image-making. Whether through the use of techniques such as the photogram—a camera-less technique of inscription on a photo-sensitive surface—or the capturing of the movements of anonymous passers-by, over several years, from the same balcony in Beirut, the artist records the traces that animate and inmate bodies leave in space. Since 2015, Asfar has been working on an ongoing project entitled “Experiencing The Mountain”. The project presents a shift from an engagement with the technical potentialities of the photographic apparatus as such, to a more thematic engagement with landscape as medium and subject. The work approaches the depopulated mountainous Lebanese countryside with the meticulousness a of a land surveyor and the sensibility of a Romantic landscape painter, in an attempt to demystify a landscape at once arid and fertile, long-domesticated as a symbol of nation and tradition in Lebanese painting.
nadimasfar.com

About the Publisher
Founded in 2015, Kaph Books is a publishing house based in Beirut, Lebanon, specialized in quality art books – photography, fine arts – on Middle-Eastern artists or art practices.
Each book is unique, created in collaboration with the artist and the contributors, with high technical and design quality.
Our mission is to promote the talent of artists from the region – whether they gained international recognition or are still emerging
kaphbooks.com